My father, Charles Edward Howes, was born in London in 1899, died Canton, Ohio, December 27, 1969. He became a U.S. citizen in 1940, after having served in the U.S. Navy in WW I as a pharmacist mate aboard a hospital ship bringing wounded from Brest, France, to New York. Although he never graduated from high school as far as I know, he was a successful salesman all his life. Most of his working career was as the district sales manager in New York City, then in Canton, Ohio, as assistant sales manager, general sales manager, and finally v.p. of sales for the Berger Manufacturing Division of the Republic Steel Corporation. Berger was a sheet metal fabricator; at the time one of the largest manufacturers of school lockers in the U.S., along with other steel office equipment and steel kitchen cabinets

His father, Frank Edward Howes (born London, February 13, 1871) , came to America in 1907, landing in New York, and then traveling Chicago, Illinois. He brought over his wife, Emily Maude Cooper (born London, January 1, 1872) and four children (Marjorie Helen, Charles, Jack Frank and Nancy Emily) in April of 1908. Frank was a furniture salesman at the department store of Marshall Field. He died in Chicago of diphtheria December 6, 1914.

Marjorie married John David Adams and had one son, Donald. John died of WW I related injuries in 1937. She died on February 6, 1966, in Batavia, Illinois. Donald never married and died in Wisconsin in 2007.

Jack’s wife, Peg, was the granddaughter of Edmond Theodore Horlick. After the death of Frank Howes, Jack’s mother got work as a janitress of a school in Chicago. She met there Ed Horlick, whose wife (Josephine Lundgren) was institutionalized in a mental hospital. Eventually, Ed Horlick and Emily Howes moved from Chicago and lived together as husband and wife on a small farm in Batavia, Illinois. To my knowledge they never actually married and Ed Horlick never got divorced. They had no children. But that is how Jack met Peg, and how as a child I knew my grandmother as Grandma Horlick..

Elaine married Melvin (Mel) Strong and they had four children. She is now a widow living in Columbus, Ohio.

Richard (Rick) married in 1960 and divorced in 1979 Genevieve Mansfield. He remarried Joan (Jody) Marie Almond on October 25, 1980 and lives in Pensacola, Florida.

More on the Howes family.

Nancy Emily Howes was born in England at St. Paneras, County of London, July 24, 1904, died December 21, 1978, and is buried in the East Batavia Cemetery. She married Clyde Hiram Brading in Chicago on October 17, 1924. They divorced after two children, Joan Marjorie and Gilbert Jack, were born. Clyde died July 9, 1970. Until her death, my grandmother, Emily, made her home with Nancy and her two children, at 61 Laural Street, Batavia, Illinois.

Gilbert Jack was born June 17, 1930. He is deceased but date of death is not known. He married three times and fathered five children.

Charles was born on August 24, 1924 and died in Chicago on December 30, 1973. During WW II he served in the Pacific Theater in the U.S. Navy as an officer on the aircraft carrier Yorktown.

His schooling during officer’s training during the war made it possible for Chuck to go to school and get a law degree from George Washington University in Washington, D.C., following discharge from the Navy. After law school, he went with the Federal Bureau of Investigation, first in Bristol, Virginia, and then in Washington, D.C., where he spent most of his FBI career in counterespionage work. After leaving the FBI, he was the internal security officer for Kemper Insurance in Chicago, Illinois.

While in FBI training, he met Capt. Margaret Belle Binkley (b. September 26, 1915), from Hagerstown, Maryland. Known as Peg, she was nurse and a officer in the U.S. Navy. Peg got her nursing degree was from the University of Pennsylvania in 1942. They were married September 20, 1952, and had three children. Peg died two years ago.

Daniel Earl was born January 16, 1926, was in the U.S. Navy during WW II in the Pacific Theater as an electronics mate, and following discharge from the Navy got a mechanical engineering degree from the University of Wisconsin in 1950. Dan died on May 13, 2008 in Denver. 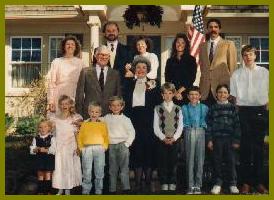 Mark got a BFA (bachelor of fine arts) from Colorado State University, did further study at the University of Vienna, Austria, and ranched a 20,000 + acre ranch in Wyoming for ten years. Mark is an accomplished artisan. He is the owner of Double H Ranch Saddle Shop in Ft. Collins, Colorado, where makes and sells saddles and other gear for working cowboys. He is reported to be one of the finest custom saddle makers in the world. He’s made sponsored trips to stations in Australia with his saddles and saddle trees of his design. Mark’s website, www.dhss.com, is worth a visit.

Nancy got a B.S in nursing from Oklahoma Baptist University. She is an obstetrical nurse in Bristol, Virginia.

Philip was born in Canton, Ohio on October 9, 1935. After graduation from North Canton High School, he got a B.S. in business administration from Pennsylvania State University in 1957, and then went on to earn his law degree from Western Reserve University (now Case Western Reserve University) in 1960. A small law firm he joined in Canton in 1960 eventually became Howes, Daane, Milligan and Erwin with offices in Canton and Columbus, Ohio, specializing in civil litigation in the representation of railroads, medical professionals and hospitals. In 1985, in London, he was inducted as a Fellow in the American College of Trial Lawyers.

The firm was dissolved in 2003 and the office merged into the Canton office of Buckingham, Doolittle and Burroughs, a large law firm with offices in Cleveland, Akron, Canton, Ohio and West Palm and Boca Raton, Florida. The firms website is www.bdblaw.com.

Carolyn Sue Mote and I married in Dayton, Ohio, on August 6, 1960. She earned her degree in education from Miami University and taught school until Daniel Charles was born on July 15, 1960. Daughters Sarah Elisabeth and Meghan Sue were born on June 7, 1964 and August 16, 1970, respectively.

Daniel earned a B.A. in history from the College of Wooster and a Master of International Affairs from Columbia University. He entered the newspaper business in the small daily paper in Athens, Tennessee, and then became a reporter for the Roanoke Times and World News. From Roanoke, Daniel went to The Detroit News as a business reporter covering the auto industry.

After Mercedes Benz bought Chrysler, in 1999 the paper sent Daniel to be the its European bureau chief, living in Wiesbaden, Germany. He reported from 20 European countries on three continents over four years. While there, he made several trips to Sweden, including one near Christmas in 2002 when, during an interview, the president of Volvo discovered Dan’s Swedish heritage and insisted on taking him to lunch at a Christmas smorgasbord.

He is now a columnist for The News. You can read him Tuesday, Thursday and Friday on the newspaper’s website www.detnews.com.

Rolf: Forgot to put this in the last e-mail: My daughter Sarah’s husband, Angus McIntosh, is a chef and owns a restaurant named “Iris” in downtown Canton. It is decorated with old family photographs. I’d forgotten what was hanging there, but last Saturday evening when eating there I saw a photograph I’d forgotten about of Eric and Anna-Lovisa Edgren and all eight of their children. My mother was the youngest and is seated in the middle of the front row in a white dress. Do you have this photograph 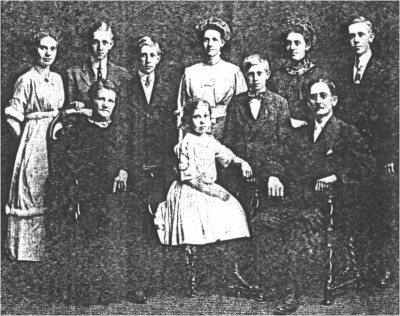