Ernst Ericson was the youngest brother to my grandfather August. Ernst worked in her youth in Grytgöl, as a factory worker. Some time Ernst lived a short time Coming to Grytgöl probably to Fridhem, in the same apartment as the brother in law August’s mother-in-law, Sofia Wilhelmina Schanberg in 1898. Ernst lived there when he got married in 1900 to Hellen (Helena) Nyström.There the first children were born. The family moved to another apartment 1902 They emigrated to the United States in 1905. and at first they came to Chicago. There they lived later in Waughegan, Illinois, (See photo). After the parents’ death, two of the children lived with relatives and moved eastwards, et al. Letter from Ernst’s niece Rut McGee in Minneapolis. Nothing knows about the continued fate of these descendants, or if they still live. New Words in January 2007: (Source Waukegan Historical Society) Ernst lived in Illinois 4 years Immediate Cause of Death: Typhoid fever Place of Death Waukegan Ill .:1910-01-22 Place of Burial: Oakwood Wife Helena died 1913-08-20 . The eldest daughter Bertha married William Harper at the age of 23. They moved to Milwaukee Co., Wisconsin, where they lived in 1930 with the sons Norman and William and the daughters Vivian and Marion. William Harper was summoned as a military during the First World War.

Hi Rolf,
I can give you information on Violet Ericson McGinnis’ family. She was the youngest of Ernst’s children. Ernst died when she was quite young and her mother, Helena Nystrom, died a few years later. She and her oldest sister, Bertha went to live with Nystrom relatives. The rest of the siblings were divided up and they lost contact with each other. As a young woman she studied nursing and worked as a private nurse for several families before her marriage.
Violet (Vi) married Ambrose (Mac) McGinnis in 1930 in Chicago, Illinois. They moved to Crown Point, Indiana. They had five children, John (b.March 1931- d. May 1913), my mother Sharon Mary (b. June 13, 1934) Kathleen (b July 1937), Daniel (b. December 1940), and Patrick (b. June 1942 – d. November 11. 1967). Patrick died in a car crash at age 25. Vi died December 22, 1973. Mac died December 20, 1993.
What other information would you like? Do you want a complete family listing?
Most of us live still live within a few hundred miles of Chicago area. where the family originally settled in the US.
It is a treat to discover family.
Lee-Ann Meredith 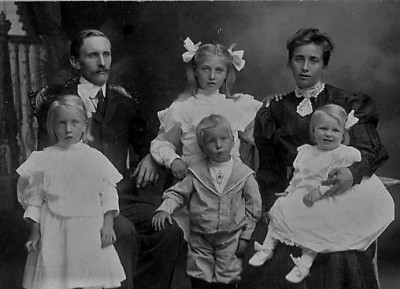